PREVIOUS NEXT FIRST INDULGENCES OF THE AUTUMNAL BEE, A honey bee...
XIV

INDULGENCES OF THE AUTUMNAL BEE 17

A honey bee
confused
to find
a flower fleeing from her

but the higher & higher She soars
th'deeper She becomes entwined
in the black, black hair
that fleeting Beauty (always)
leaves behind:

And so
she takes
to The Quicker air
of Fall--

And perhaps down there
she'll find
Beauty
not as unkind
& just as rare. 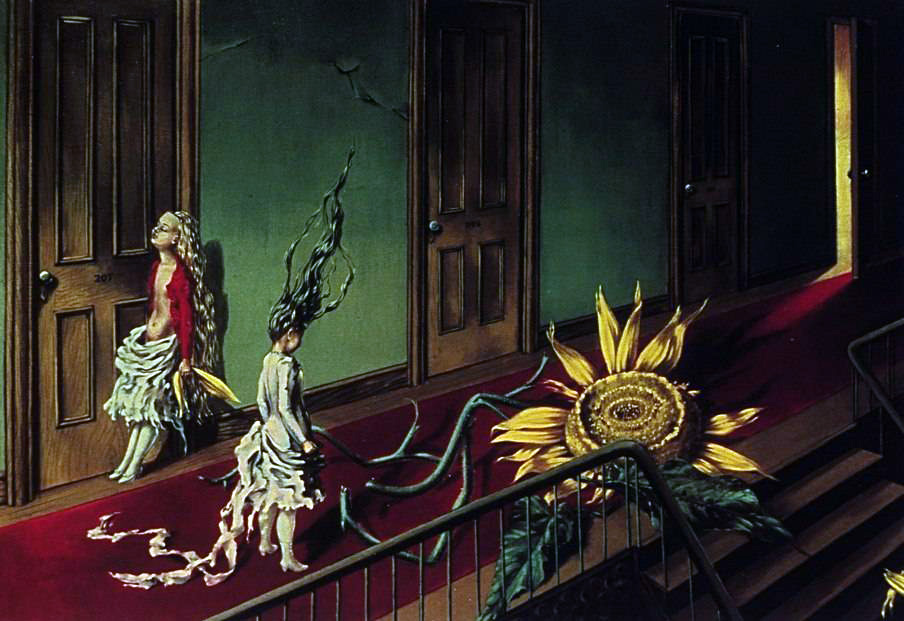 ^{17} Maybe too many stark metaphors (those which remain unexplained by context and connotation), that is my weakness: "Flower" for "Spring;" "higher" and "closer;" "black hair" for "chaos, dissolution, confusion;" "fleeting" both momentary and (suggestive of) fleeing. "Quicker air of Fall:" "Fall" being even more suggestive of death than "autumn." The Race Towards Death being (psychologically) exciting, exhilarating, lively (and not at all unkind: unkindness is but Aftermath and death has no aftermath). "Rare," for "unique." What kind of fancy is "a fleeing flower?" Only a fantasy? An illusion? The bee as metaphor: What else would one find in a poem? It should not be astonishing to find that fleeing beauty to be leaving (behind) an entangling trail (it's sheer folly to pursue illusion). Fall (here, the autumn) as metaphor for the death-plunge [as in so many other poems of mine]. The ironic "quick(er)" --so often applied to the living-- inviting the bee out of its frustration (being as if held in place up there where it finds itself). This poem of contrasts is also about two very distinct though not so very different [sic.] dimensions, one above the other (or, if you like, paralleling).

It may be that when one makes the philosophical proposition (for which the poem is the specific example, or validity) it cancels the necessity for the existence of the poem itself. The reverse may also be true; while I rather like the poem much more than I like its reason for being, I am against the idea that all aesthetic functions are incidental and that art should somehow have a more practical intention when contemplating --as opposed to, studying-- art: For me, art is an apperception of meaning in a medium (poetry, in this case), and I have worked for the perfection of the medium with the faith that it is not always possible to distinguish the product (Meaning) of the process (Medium) from the process itself --especially when it is not convenient to think of the process (medium) in terms of it being its product (meaning). Here I have made (a poem) a medium distinguishable from its meaning... even if such a meaning is not understandable in terms other than or outside of some narrow medium (for, writing a poem, I am only incidentally several many beings but a poet first). But do not call me dishonest to cut at me (you might as well say I have eyebrows): We are all dishonest, and, indeed, it's almost an indecent pleasure to come across anyone who so very naively tries to hide this from you to the bitter end!@