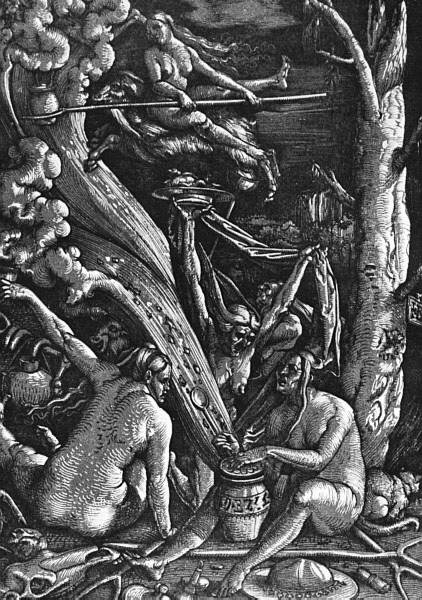 All so effeminate You are
a promenade through which we stroll

rest, or within You hide
from The Anguish of Light

So Solemn Night
even Th'Breeze is stagnant

--I'm lost in Woods Demoniac
& embraced by too much Solitude:

O that some Star should die

some Bird should scream

Storms stigmatized The Broken sky
with Neverness which swarming by

left me well conscious it implied
I was struck down as if I'd died!
--Sunk to some convoluted Main
of moving Darkness, lightning-slain,

but only Darkness filled The Side
& poured on me its Awesome Tide!

Till: One! approached me, tall & trim,
and stood beside me mute & dim

THEN turned with utter self-control
upon His Consecrated Role

Thusly He went without remorse

until... before a gallows-tree
gaunt & deformed as Destiny

twisting so slowly with the Wind
in hollow Horror flushed & grinned

like One whose Crime had been a joke
--That wasted Body thusly spoke:

Wait long enough & All Of You are chaste!

--Massacres of (a) myriad shrimps
by Life's bloodthirsty, greedy imps

are but regrettable poor lack of taste:

--you do not need to feel remorse
over your evils & much worse:

:Majdanek's flocks of butchered ducks
stared out (like humans!) horror-struck

lifting their wings in noisy prayer
(not knowing they were Someone's fare).

At Buchenwald the lambkin gleamed!

& mutton out of Auschwitz seemed
tenderer than Dachau's slaughtered geese

but Murder cures our starving Pain

& while Zeal chars That Distant Cane
we lap The Sweetness of our Gain.

But, where's The Crime? when Man pursues
The Virtue of only His Self-Abuse

Where is The Crime when Man's a Brute

and Winning is his Sole recourse:

without a second thought to Source

standing by idly pat & mute
as IT leaves 'others' destitute

--Man lives down with cold-blooded Pride
the Recreancy of his suicide...

--And The Point is NOT that he must kill

(to fill Th'Hollows of his Thrill
or line his belly)

but that Man
lives by The Evil of his plan,

dies by Th'Good that thwarts his Skill!
Thereby," said he,

"The little lie
is that men die as if to say goodbye!"

& laughed: "The Lie is that Someone knows Why.

--Keep to your Ways, O men, and try
what Trials you will yet justify

--I here will hang till such a time
as Rock of ages turns to slime!..."

And yet in spite of all his Say
Death brought him down, dragged him away

(one more apostate He hath caught

--his lot's hard knot, all he had sought:
The Rot of Whatnot at his throat).

But, "Save him save him from Such State!"
then seemed to whisper all the trees
and sang in anguished Hush the leas

A rainfall's flower that showed her spite
in sear disgrace loses her sight!

A butterfly whose swaying flight
carries her past The Moving Rite

of Hope ... that hollow Pall
which sucks The Spreading from its Sprawl

... The Monster keeps His steady pace
and Body shadows Space to Space

into a telling Without Trace
(fiction beyond Time & Place).

Driven insane, a Gust of Wind tries on & on
to save him, but upon The Stillness dies.

& too: all beasts with eyes & tongues
grown silent & blind to th'nacreous wrongs
(once the bursting rainbow's...
now: Design's reeling back in All Cause)

--While I dreamt on

... I saw
Life's verdant, deep but darkless dales
& traveled where there was no Law

(while Twilights filled My Pale)
Then Thought came down to earth:

Then did I see at last The Difference
between The Lie and lie,

looked on the meaning of my birth--Too late:

& then descended His rewards on me
as,
"Must I die?"
I screamed aloud

... Forever
Fear & Fear (I stood against The Dark
waiting for Night) years on & years

that dawning which so slowly grew

^{196} The logical comparison is to Edna St. Vincent Millay's marvelous Christian Paean "Renascence." But comparisons end with the form. That poem is a straightforward story of death & rebirth (however symbolic). The 'hero' of this present poem 'walks' into a shockingly dark ("verdant" = previously unsuspected) duality of which he is an inescapable part (he tries to escape, but not by dying). He starts out (impossibly) trying to discover (find) his mate (soul) amongst the totally inhuman aspects about him, and is finally, miserably (it's his own fault) 'guided' [by his horror 'personified' a guide] to his true mate (a kind of self-destructive nature). The nightmarish landscape of the emotions (let loose) is 'where there is no Law.' "Must I die?" conveniently (not "to be or not to be")... Man is more likely to find his dark side is self- destructive, rather than suicidal. "Lie" because "forever." The jarring pun at the end (designed to have a mocking impact), "hauling to" (a vulgar turn); but because our pretensions to being 'civilized'... the coincidence of my being able to use "hauling two" (never losing the guide) entirely felicitous. There's no 'waking up' at the end (only a distant 'dawning'), no 'Renascence'... just the (usually terrible) insight along the way to the end [whatever] which (that) we can't escape (all) that easily.@