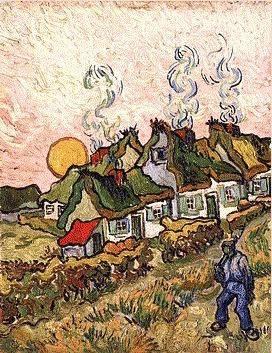 seldom rising to th'Sky
or sinking to a main;

oft going off to die
but only to be born again

World hangs on hands
tossing her like a ball

half lost amongst Th'Countless, Alls

around Th'Light of Once, World strolls
on what Fool's throw:

circling, circling fore & aft
on & on She wonders through

while destiny waits in her way
with midnights Time silently weeps

until even Th'Ultimate
destroys its Aftermath
& dares --forget!

through slumbering heads
and buds: The Continuing String
of Life's possibility

as quick Mortality
twills over us Spring!

^{37} Obviously overblown. But, however drawn out, the poem does belaboringly set up the rather abrupt conclusion neatly, nicely (and since it involves one of those shifts which I like to use in place of some more artificial device): I must stage it subtly (at leisure). That "shift" is from the tumbling planet in outer space to the rock-steady inner (space?) of that very same ball. Still, what to make of this poem? It's so full of lies, half-truths, middle-truths & endless absurdities --But I like it (that's always the point with me). Fourth 'quatrain' speaks of a boat. The penultimate 'quatrain' holds a compromise (by saying 'a divine mathematician" rather than 'The Divine Mathematician').

The inescapability of Faith. The child is (not "to" but "in" his way of thinking) the only inhabitant of his world: all other persons are whatever role --not persons-- they are assigned to (from his understanding?) and it is only with a substantial passage of time that he grows to realize the complex role which is played by the individual human being --acquiring such non-childish understandings as the need for (or role of) altruism, a social conscience and social responsibility (which is another form of sacrificing one's primal urges as well). There is an intrinsic necessity for the child to accept without question whatever is proposed to him as truth (otherwise, learning from only personal experience would kill a lot of children): this perhaps is why although I know there is no God I still believe in Him. The validity of this truth is, as always, survival-value: Not whether it is absolutely true (good) but whether it is good enough at the moment to keep the child from harm. For the [mature thinker] it is necessary to 'assume nothing true before proving it.' Even this statement is a so-called paradox, since you must assume it is true before you go on to prove it [however, no use despairing over the human condition to such an extreme: It's OK to be child-like occasionally --AS LONG AS YOU THEN ACHIEVE SOME DEGREE OF MATURITY FROM THERE]. Regardless of what others will tell you, philosophy begins with our fervent desire to find proofs of the validity of what we already hold to be true (and facts either mortify us or elate us to no end), Some philosophers are great in spite of their prejudices (and some really sordid artists have produced some of our purest works of art). That moment one begins (self-consciously) searching through proofs against one's own highest beliefs to see if one can overthrow them (before they overthrow one) is the moment one can claim to have become a serious thinker. Sometimes I think it is a prerequisite of religion that the religious not think about the subject: As soon as one begins thinking seriously about religion one becomes (at first almost, and then, at last, altogether) incapable of continuing to be religious. [Averroes neatly pulls God out of a mental trick "Eternity of motion demands an unmoved mover" ... Well, I agree, but the unmoved mover need not be God (except to Averroes): It can just as effectively be action-at-a-distance 'forces' such as the electromagnetic forces [or if it were to turn out that gravity does not affect things through a 'gravity particle' but through the total absence of any particle at all]. --The idea of motion IS only possible against the idea of non-motion, but matter is enough in this as in everything else because one motion can always be described in terms of another motion... the motion of any matter vs the motion of some other matter] I do not dispute St. Augustine's "Believe in order that you may understand. Unless you shall believe, you shall not understand." However, I do regret the old boy did not think through his great statement far enough beyond his own prejudice to get all the way to his own prejudice. Again, as you can see, it is not necessarily The Proof of his particular prejudice. Only when the serious thinker's first priority is a (reasonable) willingness to subordinate his idea of the truth (prejudice) to the results of his study can he/she then begin to escape irrelevancy. "Nadie escarmienta en cabeza ajena," (Nobody learns the lesson of experience from someone else's experience) is a popular Spanish saying which is obviously not true fundamentally but sure as Hell sometimes seems like it! Whoever thinks the mind has mathematic truths (knowledge) independent of sense experience just plainly never had to write "6x8 is 48" on a blackboard 50 times when he was a kid! Man legislates truth; as long as truth will allow, certainly, but truth allows just about everything that exists & then some. Only when it runs into some extreme insanity does truth stand on its own against everything else. Even then, who can tell which truth is the sanest (or, the insanest of two--graviton or no graviton... and it IS hard to accep the notion that gravity can act across an 'infinite' amount of space)?@