riding th'toothpicks
over the quicksands of the shriek

Grasshoppers chew their brains out
on the pointless pencils of lead-

poisoning episodes of When, and
pills' epilogues

... & bull butterflies
(their flawless flights barreling through
the noons of the night dead-terminated

by th'too predictable tongues of Chance)

with flowers pregnant with presumptions
muffled in the very face,

assumptions the falling leaves which alter the cosmos

(chiselling astonishments with every kiss)
playing behind the barricades

are the bees mindlessly following
the trails of their own (outward, offbeat)

seclusions: down to darker conclusions,
spells passing in the breeze, debris

down the sunless boundless two Jews
walk'n a bar, where there's a nude dancer:
an uppr-class Jew
& a no-class Jew,

well, th'uppr-class Jew ain't never seen this kinda thing
before in his life so he gets carried away

"-What're'you, nuts?" he tells his embarrassed companion:
"It's too much!"
... Well, some goy at the bar
comes over and sez:

"We might walk out here with a 50-bucks profit
but it sure-as-shit isn't going to be
clean..." languid, so languid, in the bowels

of Hell: listening to an eternal conversation
between Truman Capote and Charlie McCarthy,

sights & sounds extending their arms overseas,
trying to hold the mess together in the simultaneous

with! of Truth's sonority
parades the grand Majority,

picketers, the impassioned peanut-vendors
& propagandists of Salvation or Sin

of consummate consumers, carefully, cautiously
counting (upon) their Place!

sacrificing or yet compromising
their mortgaged lots in life,

smiles like claws, or dancing & dancing
to pass off unseen in Th'Senseless

& curses amongst the blessings all,

wizened in the waste of want,

spitting on from the tall & hitting from below
by the small, th'white birds of the Fall
protesting, chased by the dogs of the dusk,
in their flights of dying over the Summer's
carnivals in The Image of God
between a dying & Death, myself included,

children & bugs & Everything (in The Image), O
God, in The Image we go (can you imagine it?)

we go on combing all th'regions of Existence,
collecting life's precious crumbs:

wandering through snow (on th'gas of their hunch):
"Here, here! I got real cheap matches!"

to emphasize th'heights of their Pride,

manicured park grasses for lunch, to keep from starving,
worlds & swirls of 20,000 kinds of ice-cream cones!

of humanity trying their worst to avoid that name,

all over themselves ignoring each other,

where eyes never meet, pain never passes from the same,

lips which, by their Creator, were made to kiss,
happiest when fists miss, or if--

I watched him coming towards me:
holding a baseball bat like he was gonna strike me [sic]
out (maybe because I hadn't removed my hat
at his cat)

... and he hit me on my back
--since I had been trying to run away
obviously not fast enough being my crime,
almost in passing--

somewhere in the recesses of a shattered common sense
I said from my pain (trying to soothe it)
Hell, they always said... someday
I'd have to strike out on my own...

I said: "Boy, are you stupid!" I said:
"You can't even properly count to three,
you blockhead!"

... Who was that said "I'm not a very brave man
even though my mother was a shy Ann,

shy Ann--You get it?" I got it:
It was that second (unexpected) strike

that finally put me in the hospital all those months
while I was trying to figure out who the hell I was,

on which planet had I landed
(it was filled with strange beasts:

creatures who use every last shred of truth,
of facts, of logic... to either try to get their way

of God (the bug-eyed Rodney Dangerfield
recurring) amidst the multi-images of what-was-this?

what-was-that? what-was-it? this 'thing'
everybody kept calling 'a hand' of mine

(it was never made too clear whether they were trying
to take it away from me or trying to let me have it,

but in my condition there didn't seem to be
much difference)

... and I wasted many weeks
trying to figure it all out before they pointed out

while staring at it

(right there in front of my eyes), hour upon hour,
dimly at first, dimly, and then

at second, at third: It all slowly
started to come back home to me (the pain!):

I started to remember something about...

... Then I began to remember

something about the ancient people of the Bible
... using them as underwear (hands?

the Garden, grabbing his balls at God!
(Remember Rodney Dangerfield: no respect,

"I have found again The Keys to Paradise!"

... in His infinite Wisdom, th'lights,

the confusion, the sirens...
nobody even bothered to ask old Adam

(maybe he was shy, merely, I told my physician,
and was kept, for further observation: an extra week
in bed), but

Utter damnation, utter expulsion from Paradise
the Garden because: lack of proper attire!

laughing & said, "Excuse me, but Th'Management

amongst the ruddy birds of the dawn

trying to smash through
th'porcelain proclamations of Man,

perhaps feasting upon the bells (only I hear),
th'sights that don't seem (to haunt
any other man), of th'words gathering Th'Dust's dull

stones (upon which stands th'glorious Mankind)
like foundations of sand

amidst the many unnamed identities:

despite all the peculiar pelicans
at their can-can, dancing all around me,

The Green's on! (whatever't means) Let's shove it,

or, I ain't about to pay for your life

with my taxes, let alone for your death!
so don't you dare die in our driveway,

let's have th'rest of'em: In my own time, Juan,

keep your pants on, keep your eyes on the road

if you must die, if you just have to die
(no matter what the holds of life):

do it with your boots on,

Sleep with an eye open (all the time), remember, always
remember to leave a loaded pistol under your pillow

for the tooth(ed) fairy, Shut up, or,
Don't talk at all, to begin with,

Gimme your dough, or, On your own time, buddy,

in your own tongue (invented by yourself alone

& only for your own personal & exclusive use

(just don't show it to every other man,
at least, not those with baseball bats),

Speak only in the terrible individuality
of your own dead tongue, my man,

but don't you dare pretend you don't understand me,

because I am a plain-spoken son-of-a-

Listen to all the others' foreign languages

their leaps of th'Mindless (actions),

their trash heaps of worthless thoughts

make believe that you are understood

YOU are ALL THAT EXISTS,

fragmented into a tawny multitude

thirsty in the invented deserts of its Will,
melting dry under its churning oceans of passions

(the undying dust), refuting beyond all truths

within the synagogues of th'centuries

eternity's processors crushed under the works):

take-the-money & run, man, if you can

risk th'Trampling
hordes (themselves trying to get out)

by... holding fast yourself

against that surf wriggling
like a never quitting lie

between Life at its best living

and th'worst undying of Death's 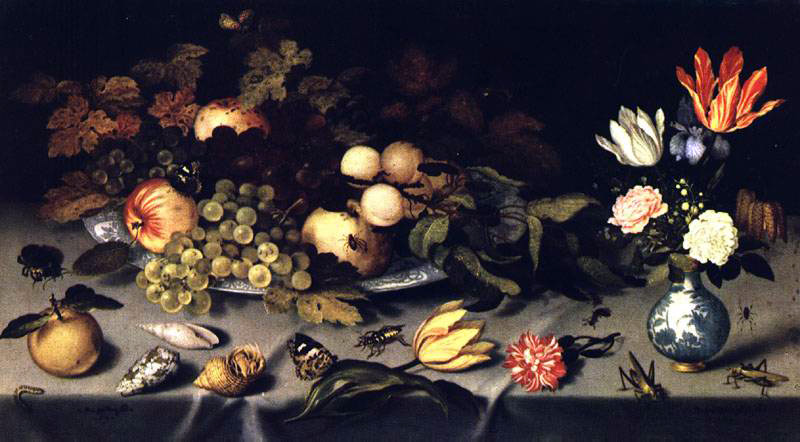