PREVIOUS NEXT FIRST THE WORD IS TRUTH, Painstakingly I searched...
XXXVIII

THE WORD IS TRUTH 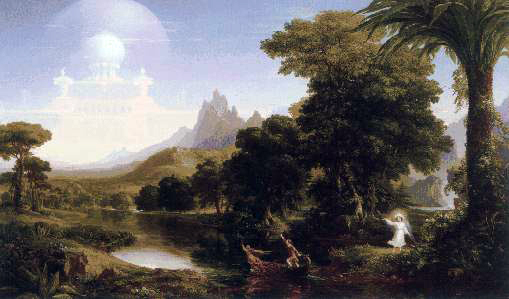 Painstakingly I searched
my heart: for a passion
with Mankind, for a peace after all,
for God, for Love--In a rage
I shook down the myriad leaves
looking for that one unquitting
(only one) untouched by Worm:

sensibly, I transfixed
Life (in dream & reality)
trying to find Beauty, Feeling,
Faith, Truth, ever looking for a
Hope's word from someone,
from anyone ...

The only passion in my heart
was its own unrestrained Pursuit;
the only Love I found, the only beauty:
Truth--The one genuine God
was Hope. The only Peace
possible: Song...
The only yet whole leaf
one all too young.
The only Word came from
another tramp, who on The Long Way
smiled on me, saying
"And keep onwards, lad!" 41

^{41} The printed syntax conveys the emotion. Maybe a better monologue than poem. Certainly an extremely early work. And, not merely an early work but among the very few earliest ones I apparently deemed worthy of preservation. The unsophisticated metaphors (clumsily addressed by "is," "to be," and the others) and the necessity to include a recognizable (familiar) agent of action (the "protagonist") and the timidity about straying from the most common idioms ("The Long Way" [penultimate line]; "a Peace after all" [3rd line]; "someone, Anyone..." [line 10] all focus the emphasis of this work on the level of the straightforward story- telling, rebelling against any secondary (and, probably more illuminating) dimensions beyond the most prominently placed). It's not exactly a loss since the primary impetus in the work is to present a particularly special aspect of our culture (aside from the truth-seeking pastoral poet's "class" learning its lessons from "the tramp" who has learned to find within himself... the limits of Man's Quest): This is that point at which those "distractions" commonly acknowledged as social successes fail to comfort us as they "once did" --thus the failure of culture to give us peace of mind casts us headlong down the desperate search after some greater, more lasting satisfaction. Thus the introduction of that apparent cultural failure ["the leech gatherer" as "the tramp"] who has nevertheless achieved peace of mind (if not of body) --spiritual peace. The seeking itself (its necessity) is the thing of which we despair (as if it were that we search as the answer to a question which can just as well be formulated as 'searching'). The tramp smiles because he understands that any action of Man's is in effect the achievement he had sought all along (the seeker seeks because that is precisely the thing he seeks): What causes him real despair is the possibility however remote that he might actually stumble upon something which might frustrate this --perhaps some sort of answer to his search. Man succeeds at everything he undertakes because his nature is Will (even to the fullest extent of the manifest ability to do); the scope of his success is basically an arbitrary self- judgment he himself makes according to whether he is harder or easier on himself (the search always stops where we choose to stop it).

The title is a much later addition (as are most of the titles to my works); a blatant deception at that: "Truth" is just one more of those absolute generalities which can apply to anything you'd care to apply it to. Although, "I transfixed Life in dream & reality sensibly looking..." etc. might have been smoother, it's an impossible situation, really. "Transfixed" is still inescapable.@