PREVIOUS NEXT FIRST PRESIDENTE JUAN, Down the sidewalks of the extreme immemorial...
CCCLXXXIV 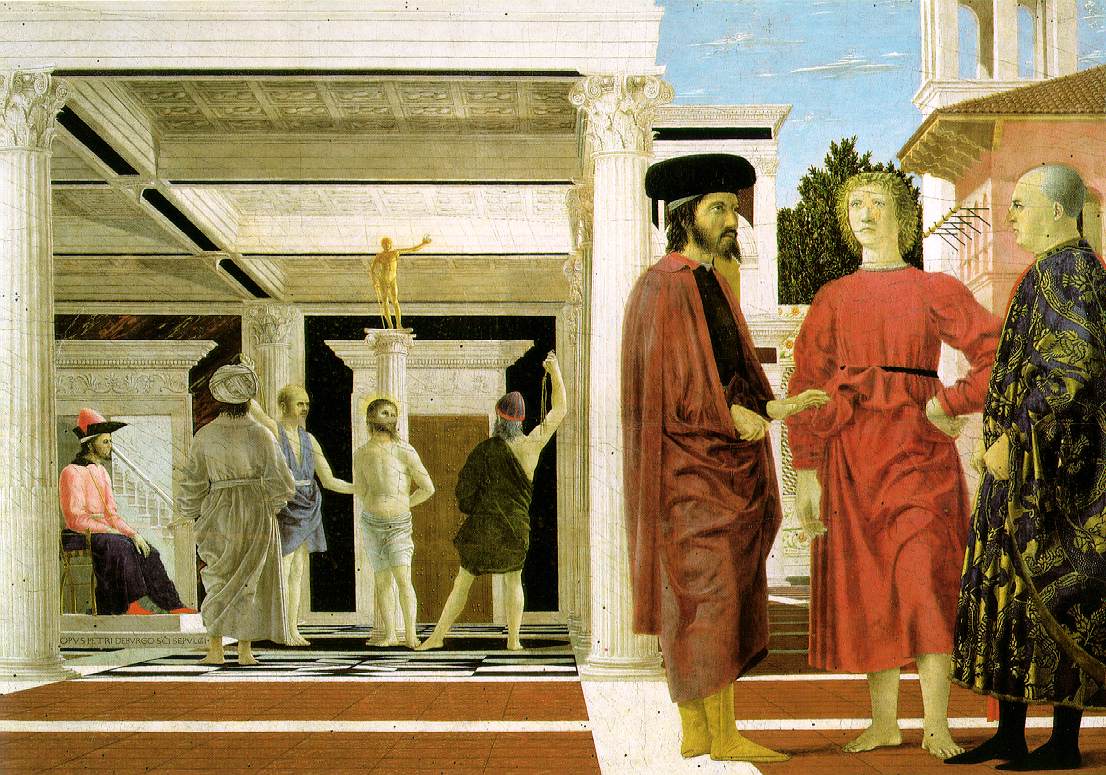 of indefinite truths & lies
as eternal mates of The Light

with mole-like eyes upon The Golden
celestial distance just beyond

red/orange of Wakefulness
at its most eloquent & omnivorous, cavernous

sweet harmonies blindly
the vultures at their height,

God gave him ears and all he listens
for--are the humming harps of Horror?

like a never-ceasing rain, God gave him
the Width with which to embrace Th'World

and he but tosses himself by th'wayside, O
Man, now comes The President of Demderhills

down to parley with The Prime Minister
of Scraggyland... out to the middle of the naked

field where otherwise: the citizens of their countries
could perish like glorious heroes

at the disposal of Chance (of course,
under the condemning sight to those to be denied
--in the try of their courage--their
kill) filthy with the sins of being,

knowing if The Peace is signed ...
never again will they be able to wash

in the blood of the Lamb... if God gives
lungs to Man: he holds his breath for Death

... if God gives him arms
Man swings from his knotted whims

... gives him lips & he talks himself
to The Grave... God gave Man Depth

and Man crushed himself down
neatly over his fellow men... God gave him

Length!... and Man stretched beyond life itself
... God gave him Height!

--What can God give Man
that Man will not take as Death?

... No, not even Nothing itself, for
God gives us Nothing

and by Nothing does Man think himself
to Death, to Death chased by the dogs of Silence

in his own empty head Old Man Gonzales:
looking for some quiet grave

... lumps lumbering slowly to the lull
like replicas of The Invalid...

from Cat Eyes, over fangs watering
at his every step sidestepping his once

(probably) much straighter
trek though the delicate ghosts of needing

dancing away... far off where there's a
tilling going on, cattle feeding upon

some (probably) sacred grass --in his head
The Eternal Question echoing, My Love,

looking at you... & thinking the undared:
Have I stopped loving you?... or

have I stopped loving?... O Man,
always seeking--only from the seekers

of Life's meaning, and never from those
who have already come full circle, finally,

since there they stand so dumbly stunned,
so struck with Life that they are total-

ly incapable or unwilling to share their Light
... so one asks of the bold and boasting madmen/blindmen

with scarfs over their eyes like wounds,
of those foolhardy enough to dance

under Cat Eyes, over thirsty fangs only
now: about to depart & flashing like stars!

in Th'Intent of Night, braves
naked in the unwitting Noon of Winter

the unsuspected, laughing flesh in their looks
of pain... down to the bones of the Soul,

famished and feasting upon their own flesh
& praying like clarions, wailing in the loud

genius of their dead words only
momentarily disturbing Cat Eyes

of yesterday sweating their beards of
Autumn's muttering mosses: go all men

mad or maddening, marching to their glories
with the look of graves

far off where there's a tilling going on,
murdering The Superficial (weeds & such)

entangled in their slopeless climbing
go the triumphing armies of Agamemnon

... those dark creatures captured by The Light
in the shadows barbarous & wordless

symbols of Why... withering,
once beautiful & flawless

in the World standing for eyes flowering
at their sublimest... comes Old Man

Gonzales, so valiantly walking the undisturbed
translucent Eternity... having abandoned The Herd,

You can swear on a stack of Bibles
that you don't believe in God--But I don't buy it,

not for th'least instant, my man, everybody believes
(and that includes the atheist, even especially,
perhaps)... As long as this life is ruled by

(for regardless all our most correct behavior
yet does Chance thwart our Plans, ruins our Designs

with its too sober look on Life... and only
in The Sweet Intoxication of God

can we delude ourselves

that by the strings of our prayers
heart-felt... do we move our Omnipotent Puppet

to master The Chaos of Chance, its
injustice)... being spotted by Cat Eyes, Old Man

Gonzales abandoned the commerce of Man
(except for Little Johnny, The New Man,

who now joins him: skipping & running &
ducking the breezes in the dance trailing

are lulling him before the very face of Fate,
deeply within him, Cat Eyes catching the scent

impossibly unimportant (of life's disasters)
numberless in Th'Instead, he tells him

This is my legacy: Distrust
all those who are trying to connect

Life's most ridiculous Little to The Grand Design!
They are trying to strip from you Integrity.

(for it) some glorious Dirge for the wondrous dying
of a portion of Man, a part of The Universe!...

unique being--You aren't a clog in The Cosmic
Mechanism, my Johnny, you are not a tack

amongst th'thousands that hold together
a toy of God's ... Cat Eyes menacing-

ly stalking amongst the meadows of Mind
the unmoved, try to earn the respect of life

O Man... Ah, but who respects the grass?
Not the cattle, certainly: All of us need or want

to get on Th'Good Side of God... but hide
a few scattered bits of broken glass

in that grass amongst all the unnecessary trappings
Man has... and then: who does that tilling?

who'll dare reap the grass that blindly? and
washed in The Blood of The Lamb, ladies & gentlemen,

amongst the breezes' least delicate
intercourses the unending herd of Man

mired moth-like in the most scintillant womb
of his Mind! perfect & unintelligible

yet, clutching at Th'Past's ever-dwindling...
O much too temptingly dangled in front of

Cat Eyes watching to catch his Chance
from amongst th'millions, in the pause, even

perhaps a specimen, or a few served
atop some righteous indignation or self-indulgence,

bloody, but over ever-so-humble-but-honest-a start
as rejecting the common wisdom of Man,

the reasonable, the honorable demands of War
for the sake of Peace's illogical,

Peace's always so unjust, always so degrading
compromises!... to the groans from The Left and Right,

to the sad looks from Cat Eyes always waiting to strike
at the heart... with some carnivorous Realization!

from all sides, feeling filthy & wanting only to wash
in The Blood of The Lamb like always

and yet: there stands President Juan
the stark resolution his frail, ancient hand

amongst the cries President Juan: rocks in his head!
too old to try him... he assures us

whose head is led by its tail through Time,
reading from The Proclamation

... once God
gave Life to Man this was all he needed
to conduct himself from the death of God to the life
of Cat Eyes so kindly culling out our tragedies,

our timeless defeats, our weariness, our agonies,
our doubts, our bitterest & saddest...

that our fellow men acknowledge, even worship:
such cheap truths as we treasure
because it is we who shaped them,
it is we who give them life, who espouse

& describe them as The Holy Work of God... Our Evil,
our Violence is not the work of the Devil,
just directionally proportional to our human worries

& concerns: The more we love
the more we'd hate to lose that love,

the more violently will we react
if our love is threatened, even by our very

love, the contempt with which we hold The Peacemaker
the heroic nature of human aggression... forever

against Fangs watering over The Blood of
the lambs marching behind
Mind's most bloodthirsty rams... Cat Eyes!