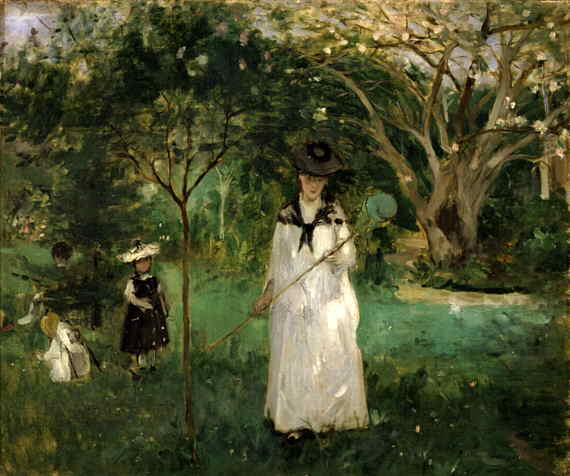 at the very instant that Hitler looks
into a mirror of his own, straightening

their ties, checking the whiteness of
their teeth (for we always regret the rotting

flesh, dug into those inaccessible places)
How did all this ever come to be? out of

All that Infinity (Only), described Death,
perfectly, once in the crib

I was asking some impertinent other question
to Harry--when he assured me: he

was going to live to be ninety!
What a shock! What a tragedy!... I told

the beautiful Illusion sipping tea
in its house of thorns: I was thinking about

all the horrors one can see in ninety
years! holy! I told Harry I had better go

finish my work & die, in a hurry, [instead of
trying to save my ass for Posterity], How did
all this ... ever come about?

Some questions
are so easily ignored! ... Unity is
some indigestible disaster: Politics

turns my stomach... and I gave up trying

as if to let me know, finally, that
Life is the mortal parasol shrivelling

in its own shadow, that Human Judgment is
really only the latest coat of paint, O Apollo,

O thou Christ lost in the bogs of About,
building the warming flame atop the glacier

... How did all this
come about, you Whore! you Bitch! Well,

I'll tell you, he threw a fart'n there, if
you can believe it, yes: it smelled like

back during The Civil War (U.S.A.) yes,
carefully explaining: That's life (right There!)

the one with all the angels & devils on the same side,
then, what's the use?... what are we doing, here

the trick, said Harry (a man with no redeeming
qualifications) Sir, says the go-go dancer:

The reason why I go like THIS is
to bring about World Peace!... the World

bubbling its smooth muscles of Summer, or
the director of some blasphemous flick: Sir,

the reason I made this film is to make people
start talking about Christ again, drinking gladness

by th'gobblets, laughing at sin, O How, O
How did All This come about? waltzing

the brittle silk, swimming somehow
in our merits like masks of water...

He made it (it is not a reflection
of things as they stand, but only some

moral illusion, some lesson burning babies
with kerosene)... Lull is The Law

from her insides... faster & faster than
the flower can reveal herself it is unbelievable

how many Christians are being converted to Christ
nowadays: whatever Darkness lives, two eyes collect

themselves eternal in the flash of Spring, shocked
at each other & shocking, as the Darkness is also

a life that lives, it's not merely the Light having died,

there is also a life to the Darkness, there are
eyes that are blind in the Light in a democracy

that's a democracy... as long as a single man
(regardless of his identity) asks WHY: The Answer
will have to be given

that open wide their hearts to the Blackness),
dancing upon the brittle crust of our mortal ash,

pardon if I laugh, but I never asked Who made it
--I merely asked: How did it ever come about,

dancing or... task: you misunderstood my question!
Well, Apollo is not a Who but a What! and God is

what made This, rattling teeth in the bitterness,
Determination the monster dimpling Death

the perfection ... with Day, with Triumph
the prejudiced, with unbiased End, shipwrecked

in the clouds, and crafting together the lashing
Always into ladders to fill Infinity to its top,

blurred in the difference, devils in the blood,
and raffled by the luckless breezes off of

Triumph's choking strings, so, how much are you
asking me to let you live? how much are you charging me
to let me live? what is the price for letting me live
off you? O Soul ever alone, ever, even from the onset

I have tried to prevent it (you know:
Man's inhumanity to Man, this century's
major point of concern)

... ah, but it seems
--the more it happens the more everybody insists
it never really took place--Future Achievements

of Man: Fellow holds a slice of lemon by his lips
for three months! (noble music & football announcer

with heart-rending words ) --Why? a dream come true
(the Great Quest of Humanity is to conquer

the greatest challenges that face Man etc.)
the Guilty in dignity, the Victims in shame,

how much do you want to let you live (the gist
of my argument), God made this (the terrorists
say they will definitely paint a moustache

of His Knowledge like an idiot's ornaments,
munching of lately a bit, I tried out

on my commercial companion the contention that
The Age was an ambush, but she laughed & said that

The Age was much less than my Argument,
Ah, War! Time for valor & noble deeds!
which was so universal it could apply to any age,

Joe Morka's Gettysburg Address: "A lotta dead
bodies out there! And the stink? Oooo-eeee!

It shouldn't happen to a dog!..." I cannot say
a word of praise, none can I comfort--only

curse the dead & try to kill the living with
my words To The Confederate Dead: "In a rotten Cause

etc."
--I'm sorry
but you have misunderstood my question:

I never asked Why all this came about, instead
I merely said How... did this (head swollen with
all sorts of magics & the meanings of my many shades)
ever come to color The Tragic... and tumble down

the comical, unravelling without a thread!... holding
conference with all the other literary rabbits,

I am snaggled so easily along the way--Do you have any idea
how often this has happened to me: There I am, minding

my own business & some panting idiot comes along,
nudges me with: "Are you ONE two?" Shrug... Life

scaring Th'Hell out of us with a discipline like The Grave,
in the bondage of Revelation I threw up my shoulders

otherwise I'd been quite content to just be another animal
like Adam & Eve, and hum in my humanity, manysided,
the hymns from the realms of Silence, but,

I am sorry, I did not say... you had won! forgodsakes

I said I gave up--You've misunderstood me, looking
right straight at me from the mirror... some

vaguely familiar face with absurd features, dressed in
a funny way, Who are you? O energy coalesced into

Intellect! enough to be able to converse man to man
with Oblivion's lilac handiworks, so unlikely amidst

an Impossibility spurning each likelihood yet there!
... warm in the muscles of th'mortal, deaf

to the drum of Sense, and singing the hollow cry
of the owl, dragged by The Again through th'centuries

that burst with the sometimes-in-numb ascent
dickering with Disintegration, I apologize...

I did not ask you: What are you, but
Who are you, O my stead... so unfeeling, in

such head, staring out hollow through bottomless
bells, the windows of Heaven, timing with

too feeling a mind: Time's endless
self-immolations... snatching out the moths

of the Illusion (Light) upon the stairways
snaking around the Nowheres volar como una rata
deslumbrante en chancletas baratas, or

damn you for suggesting that very idealistic young man
who went up to Canada to start a banana plantation
was trying to avoid The Draft (you try growing
bananas in the good ole U.S.A) the flower forgotten,

gathering rust in the withering moonlight
while reciting blood... Who are you? ever

exulting in Th'Self's exceeding secrets,
the exceeding Least, the whatever Darkness lives,

Man's inhumanity to Man?... the best & maybe
the only way to prevent it is to try not to think

all that much about it, my man, keep it out of
the newspapers--If you propose anything

as the most evil thing of all, straightaway
everybody'll start looking at it from all possible angles

& before you know it: they will have found in it
some merit after all... & nothing is black & white,

& the more men think about Something (no matter
how intangible), the more real it becomes, as

the psychologists argue (you've ever been
around the corner yet?): the more we turn

our backs on it, the harder we try to ignore it
... the more & more we stretch the rubber-band,

O, who am I?... I will accept any phonetic sound
(or even absence thereof) you'd care to propose

... Obviously you do not care what I think about you

--You're some nut. Which does not speak all that well
about you

The gathering light
sounds footsteps stalking in the dotted Night
slowly coming loose all around the edges,

struggling in The Green garden, to argue that
existence was created by God, if He exists,

is but to argue the irrelevance of Man,
God standing before the mirror of His Own Sight

asking blindly about The Maker (of gods).
O this is impossible! But here we are!

God hath made The Impossible! at its worst devouring
--Death! ever-curving our resolve

between eyes that catch sight of themselves
Darkness that's alive (because of it): all The Light

of eternity at once undifferentiated-bright! alive
with Th'Glad & Tragic of all Life, we may well ask:

How can it be impossible (called) when it has already
been accomplished!? Well, perhaps it is only

... I see, then, God maketh
what is impossible for you and for me and

... the plants are
gardening impossible sparks which (in the quiet
of Night) are devoured by The Beasts

for their fragrance ineffable & slight... What
do you mean? Meaning but relative, and

a cup of sweet coffee with some
delicate French pastries (we're in luck:

can they be!) or The Red Vampire who
tells his victim he's only puttin' it back

--that's guts... even The Light:
as arbitrary as the Darkness of th'Mind.

I'm sorry: you've misunderstood
--I didn't ask you... What is Meaning

I asked you: what did you mean? And I thank you
for the most basic human courtesy of all

--that you did not try to tell me what it was
I meant... How did all this come about?

standing before the mirror: brutal & misunderstood
even in my own Image bleeding grateful:

an anxious Future, kind and forgiving,
and forgiven, loved, and good

because human and not mythical
Redemption from whatever Darkness lives.