PREVIOUS NEXT FIRST WRENCH THE SPINE, perhaps it's Adam, at the start...
CCCXCIII 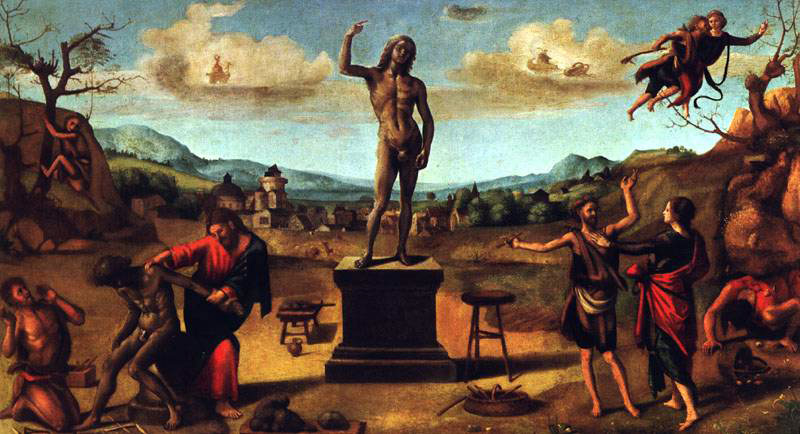 ... perhaps it's Adam, at the start,
awakened from th'dreams of Summer

and trying out his legs,
robed but in Faith, filled with th'wonder

of his footprints over the snows of now,

river slowly dripping into form
in the brain... embryo alongside Doom

the undeemed yet ever-knitting
its ultimate undoing of All, maybe

thwarted awake--once The Dark's darling,
only to become a rip of fire

in th'burst of Day, food for his ticks
of terrors, magnificent in the maggots' feed-

ing, solidly set in the uneasy
display (a clumsy clump of clay

amidst the delicate, polished miniatures) of
an ever-diminishing, huddled a him, Truth's

classic measuring stick...
in the cornfields of Gothic, blessed
with a stink enough to tumble down the green
coconuts from their tall trees, where he

passes, watched & timed by his withins,
warmed (given his very life in th'weaves of
without), watching the Cosmos at its quintessence
the Cold devoured by his deeds/needs, O

th'starkest, most human hot gust! breathing
over the breadth wrecked in th'windless,

with his burning steps (staples
into the empty Plan), aimless upon th'dance

of Chance, resolving... ourselves
to a Meaning self-made, ever so slowly

bringing ourselves awake from the dazzling
drowsiness, purging with our pains

the Plain... perhaps it's Adam, standing
again before us: contorted into shape

although numb to the bone... like buckled lightning
with all the weight of leaps off the fantastic,

staring at his Faith climbing all-shackled
in the nude & nude, a dream in life's mandibles,

a trick behind curtains, still damp
in his Creator's damn, lack to the skeleton,

down the corridors of being: bowling
each labored breath... a mouse cowering
at the clouds like ospreys overhead, 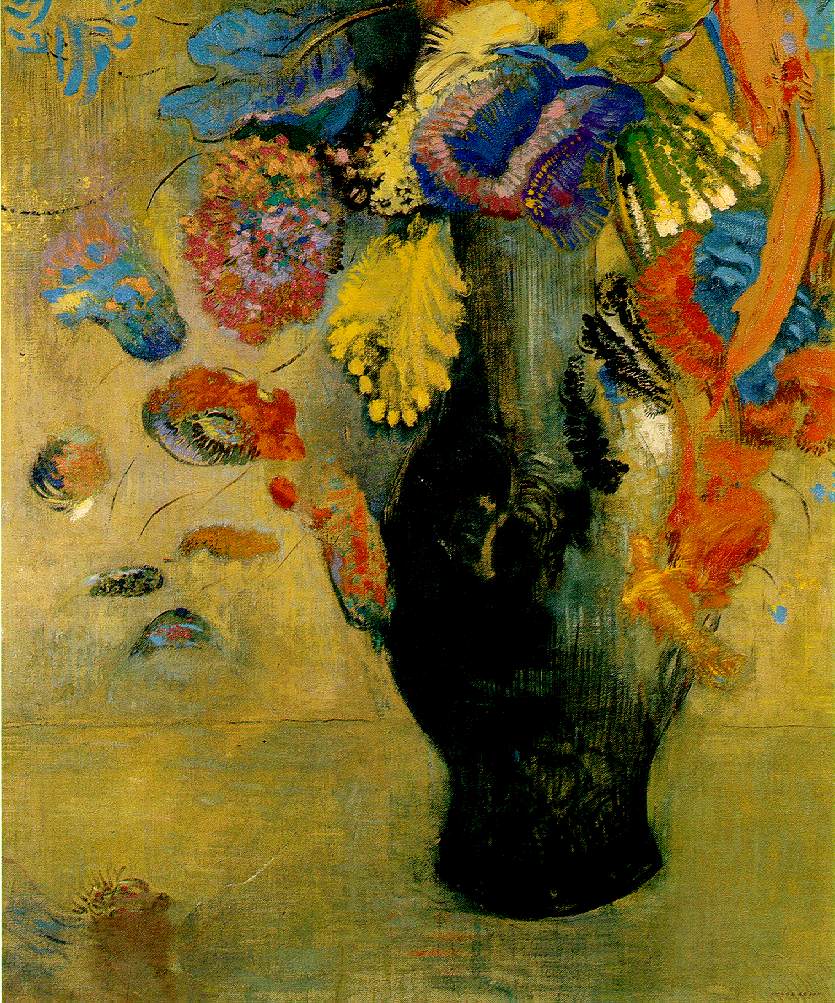 trampled under the beautiful stampedes
of but th'butterflies, stunned by the tiger

in the mottle, the trembling of th'tide, by the bee
like... Belief! the imagined claws

of crickets, the hunted victim's undaunted
tentacles, in the end... extending justifications

to his ultimate, murderous rage
beyond mere hunger, the silence in the skillet

of knowledge... wild accusations against th'stars
on the take, echoing untuned principles,

raising the foundations of a flat infinity
to well-timed bastions of flesh, like
trout swimming towards a sweet sleep from a sleep
so salty
... is Adam :

rising to the cocks' racket,
by the strains bloodstained, plumbed to The All

like some rotting, too raw a pattern, caught
in the clenching chill still, yet ever-

breaking out, bridging with a cinch
his disparate Self, become somehow

twice his All, and ever-increasing, older
than vision itself (having been born in blindness

to The Blindness), much younger than his look,
an offering of The Eventual's, and

eternity's landlocked, looking with curiosity
upon Curiosity itself, to the birds dancing

their Heaven's rituals to unheard drumbeats that
by each stroke of their wings, inwards & outwards

both... wears upon the heart earthbound, crying
out, "This is an outrageous world!" and trying

to out-run their flights, inwards & outwards
the salmons, salmons at the run in his mind,

in his muscles... the colts!
In his Will: the unhaltable willing, in his power

like a prow... his means of Meaning!
hurdling The Middle where lives All The (old) Same,

where there is nothing but a burnish of dead humming-
birds, from there... arises Adam! perhaps a man,

maybe insensible (at first) of his scalding immensity
in the Cold Boundless... but somewhere at last

with but his athletic thoughts, awakens
the greatest of all beasts... wielding Tomorrow!

like a hammer, in his hand: picks & axes & shovels
to dredge trenches against Chance,

with unyellowing delight sowing th'knots
of Aphrodite like corals upon the ragged, raging edges

of Time's ever rising tides, bathed in the rewards
of his wry sweat slandered rotten & foul

earthbound because of his deodorizing Belief!
standing in innocence, lost in the brutal

to win ... yet lazy in the leafy,
never yet having tasted of hopeless haste,

th'anchor of his being caught in the Past's
pegs Tomorrow in place overhead: is it Adam

perhaps, claiming (maybe) he's mad & madder,
both sides, smoke on the make, yachting by
the maneuvers of meaninglessness

through th'Blame, Who are you? rowing
over the overawes

... of Shame, O
gathering a quick grain out of The Gradual's
golden gardens

in his collectiveness... murdered even by the least
(mutual glimpse), who are you... become/or/

made such amazing creature/or/thing,
touched by the intractable almost to

the equal of the universe, killed into
constancy, cracked into cadence, and hanged

by those principles high enough, who are you,
so newly-stept off the heavens' ladder

like stalwart Adam... and stopping to shout
th'holiest & most sacred (secret) name of God

(he's just made up for the occasion) into
a tulip of Doubt... answered by the honeytide

drunkenly staggering towards him & winding
about, mortally wounded... trying to tell him,

before it expires out of memory, of The Crime
already committed, Who is it, the Essential

Apostle of Th'Passing, who is it,
the Custodian of what warm confusion

whom you think you are?... We
who in the wealth of our unawareness

spend our lives looking for questions
to the Solution (of Time's). 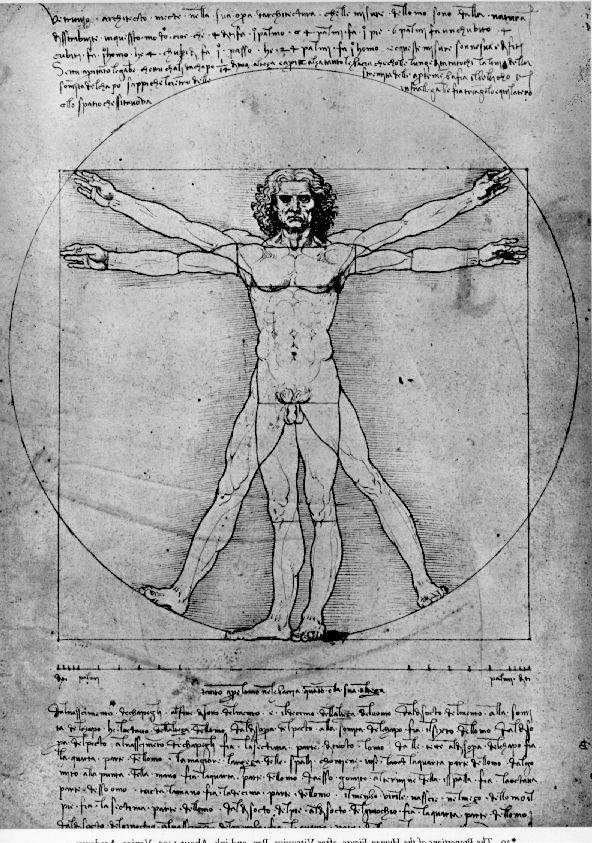