PREVIOUS NEXT FIRST SOUL AS THE SONG, At Evening or at Dawn...
XL

SOUL AS THE SONG 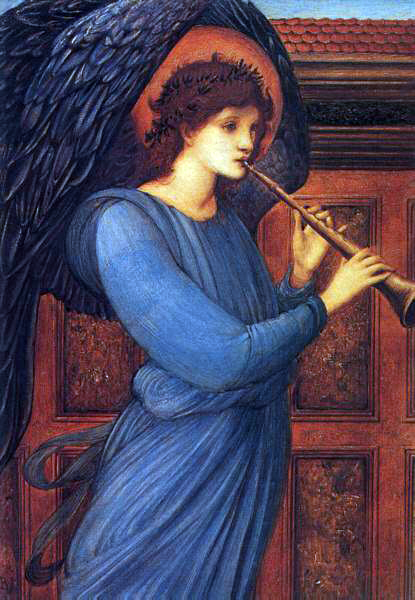 At Evening or at Dawn,
at Midnight or at Noon
over the rafters of its self Soul hears
Life's thunderous tune!

And those who cover up their ears
& rush within to hide
will quickly learn that Song is coming
from inside...

Song blows
until it's done
& grows
a Meaning all its own ...

Then, when Th'Grave above you (is) laid
all of the Music you have made

^{44} Setting down of phrase after phrase after phrase as if one could not find any outlet (to the imagination?). But, marvelous in exclamations (passing for universal statements). Well, I'll not pretend I know without a doubt just what the purpose is of making so much noise (in life); if we long for the "silent sanity" (of peace of mind, of relief --not release-- from all this life) as payment. Perhaps the emphasis falls on the musical analogy, hoping it suggests the fluidity of the soul (of the Self) within the context of existence (in the flesh) --The music on the paper is not the paper (just as the life of a man may not necessarily be the mere mortal body of that man but the one realized possibility out of an infinite number of possibilities): Paper has its own independent fate, and the blots & stains (upon it) do not of necessity color the nature of the song printed there. We but perceive the Song as paper (and seem little able or not at all to willing acknowledge that a man can change from the sort of life he has lived up to that point). Plato wished to think of Soul as existing even before its first recreation --upon the paper (since Plato thought of these things as 'actual' ideas --being a poet, he also confused his analogies into bad science, or as it was then called: Philosophy). Plato, taking the paper for Mind (as we call it now that we've looked at it in all its physical beauty: Brain)... he understandably deduced that soul (as the song) existed even before its first manifestation in a human brain, unaware that he had merely (conveniently) invented another truth (to add to the infinite possibility of truths we can invent). With terrible consequences, especially for our Judeo-Christian philosophy: it gave the primitive (the early) founding fathers of Christianity a marvelous means of preserving their cherished (more ancient) superstitions. Songs are inevitable always, and just as unpredictable; but we can always see to it that the quality of the paper encourages the great impossible composer (we should call him Nature rather than BABALU or some such): The quality of the paper affects the nature of the Song more than the other way around (however Plato may disagree): O Platonic sacrilege, I say it is possible to modify the Song without having to start all over again on a new paper. Soul is infinite and eternal only in that it has no history but that we are whistling at the moment which is passing us by (so it is also blameless); and it is not necessarily tied down to the fate of any one paper upon which it may happen to exist at the moment (because, however we may find it shocking and personally insulting, souls, characters, geniuses, and fools as well all come in classes and groups, bunches and strains rather than as unique, independent beings -- e.g. we are all Man, but Man does not exist as a singular manifestation any more than does the universe ["There are 2 kinds of people, those who create & those who don't. Or, "There are 2 kinds of people, those who drink coffee & those who drink tea." Or, "There are 2 kinds of people, those who wear their shoes one on each foot & those who wear both shoes on one foot... well, I MIGHT be willing to concede that there are more than 2 kinds of people," etc.] --Life manifests its most enduring nature in species and living fabrics of mutual dependencies, even as we poor individual creatures try to see a cosmic meaning to our wretched states of individual insignificance by interpreting life's wisdom (not putting most of her eggs in the basket of singularities) in our own neurotic ways [human interpretation ascertains all truths; in other words, truths only become truths if we interpret them so to be]. But, we cannot advocate the most reasonable alternative of all (namely, that we should put truths up to a vote) precisely because of this fact (everybody wants to claim that he/she speaks the truth): And, gods, there just isn't any end to the absurdities we would vote into Truth in any case! Man is not to be a reasonable being, after all. And the ultimate judge is survival: Those who happen to vote for too absurd a truth just do not survive and that's the instance out of which those who do survive build another truth for themselves (not necessarily an universal truth, but one for the next occasion, which suffices until the next occasion that turns against them). The wisest thing to do is keep your mouth shut, see which truths kill, and then avoid them if at all possible (others wiser than you will be keeping an eye on you to see which truths kill you, and thus insure their own survival). I'm always exaggerating to make a point: Unfortunately, Nature is a little more subtle about the whole thing & likes as not to disguise those murderous truths until the last possible moment. Any Possibility which occurs to anyone can be thought of as the archetype of a whole new universe of possibilities, surely. At least, it's so neat to consider yourself God.
[3rd line] to the utmost (topmost). [4] existence. [8] the most profound (deepest) inner place. [Soul is the Song if the process is its result.] [10] you're done (dead) RATHER THAN IT'S DONE since Song's immortal (see the rest of the poem). [11], [12] Soul is existence, the flesh is the reason for being. The rest of the poem is pedantic but still poetically effective. [Quit nitpicking.]@