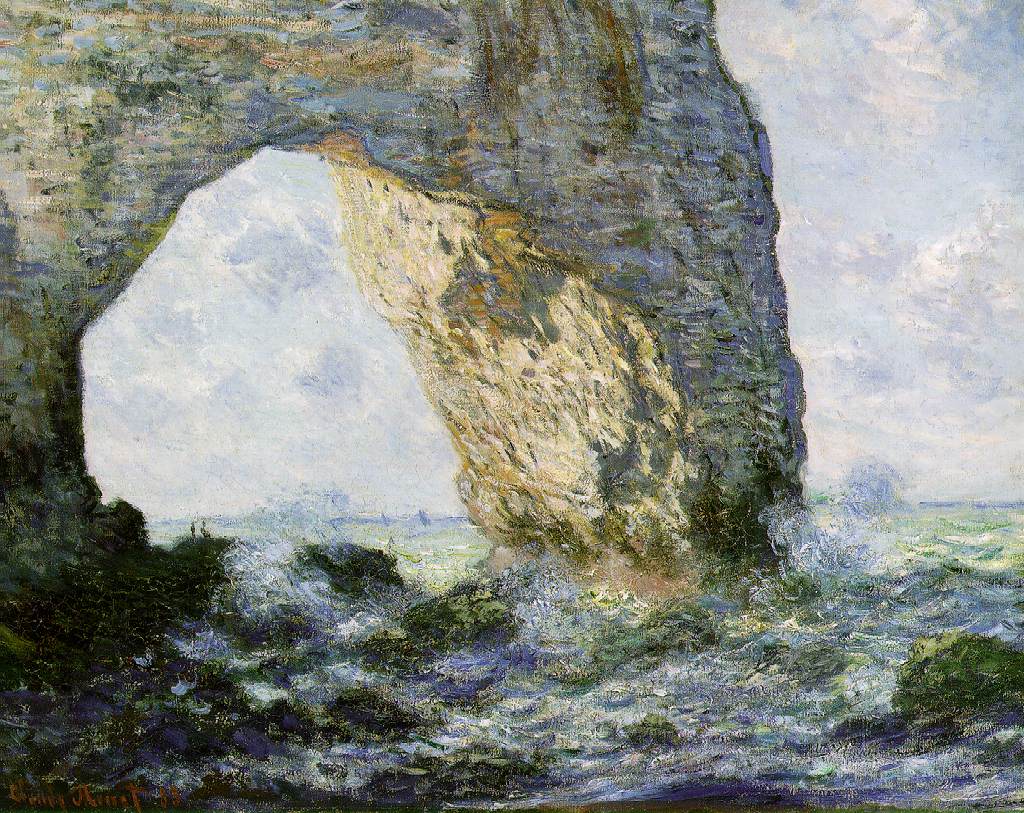 our lives, our All, pale sparrows
that bless Th'Dark & scourge of crows

neither of Here or There, mining Th'Monolithic
& picked right off the trees

... "the ones
in charge of making men into monks are
the monkers, the ones being turned into monks
are the monkees [sic]

the police officer: "It would be helpful if you
told us your movements last night" (first I went

like THAT, then I went like THIS at th'Wind's whims)
rolling careless over the carpets of self-conceit

th'container plant that cannot explain Why the universe
has shrunk around it (Autumns are all my words):

39 persons arrested for price-gauging (at
The World's Imminent End)

... the earth's greatest
philosopher discovers: Man is a mechanism

for taking in new, different experiences--falls
twixt the unheard of & the unspoken to--

so he spends the rest of his life visiting
all the different McDonalds in the land
(whole wells of words, parrots & parrots
in battalions) to The Last of Silence

THE essential Question: How can Th'Great (so-called)
internationalists cry out anti-nationalistic
& anti-American slogans in the same breath
without it choking them?

c:"What do you mean, comrade?" and, "We hate
your guts, Chamberlain, but you were a good man!"

like blazing aborigines... those who th'sweat
fails to teach must then be instructed by Blood
--which must eventually allow us to learn
about such things as all th'insufficient details

Man who wants to be famous seeks: stuntman
to pretend he's him & jump off a tall building
without parachute

falls]: Shall we put all our shoes in order?
with all th'other affairs (th'harder they fall

trickling, subduing (inheriting the Earth, for
they surely will--& brain damaged!...

every generation we leave behind (to
take care of business) is a little more brain
-damaged than the previous one...

conciliations, scrolls (the affront of fish)
errors & other considerations fall, fall (that

not even th'remotest chance to do even th'least
little thing for my fellow men--that scares me), falls

--why fish never cry in the ocean, birds never drop
to the sky (what do these things matter?), where
gentlemen: UFO sightings cannot be ignored any more
... Here's just one map with over 3,000
sightings (from all over this country: a Mr. Howard
D. Nutt reported them all while driving his R.V.

this past Summer) right through October that
aired-out house, & Winter is cold

... the road
paved down with nails/feelings so overwhelming

fall, fall (that so few of those who could do something
even bother to lift a finger--that scares me) just because

ears ... new-woke (out of the gusty bottom of a sea
thunderbolt-driven) over immense bouquets of mouthfuls

... listening to th'distortions (all destructions)
even God's Greatest Being proved too human for Him

like some cat & casually looks up towards
where he'd begun... & for once in its life

is absolutely certain of O, how far men fall
(& but by taking each step as it comes)

is no Q in Cuba--What're'ye talking: Then
how do they quit? Cubans never quit) You

phony-baloney (I'm genuine baloney, friend)
... once you admit there is no Justice, then
you can sit down in peace to your little cipherings

& re-touches of th'grey, grey, gray
hair in the pillowed emptiness or seaweed

hard over sideburns' usual labyrinth at the chair
of Destiny's painstaking dentist, Th'Wind

screening th'scruples ingeniously & all
our sad morals ... with terrible deafness

mystic oddnesses or other such ungeometrical
sweet patterns promising us: A Definite Design (to
things)

... somethings which base human logic
suspects to be thus, then actually finds to be thus

swallowed in the Shallow (after reflecting things
off its self-curved closed, treacherous brain)

between Th'Lately & Always fall our lives, our All
pale sparrows & scourge of crows: I do not know

WHY Christ came when He did--But I know why
He didn't come during The Silent Film Era:

under a heavy cross (to th'dramatic raging storm
of a ragtime pianola), a Post-Victorian crowd

& leaves Him to His Father's tides) all th'illogical
pieces of The Puzzle (fall, fall tripped) over

they're trying to pattern... falls, falls
feeling (as lost as a favorite implement,

riding a quint) like some vehicle
all we see around us is: ourselves become
regular skinny Joes or great, fat Janes
(blue-collar types with powerful/unapproachable chests
& dirty with muscles worn healthy by th'long hours

so nobody'll catch sight of th'potbellies
stuffed with their unfair shares, knees
like spoilt grapefruits knocking together

as they run, trying to get out from under
the downpouring X-rays drenching Truth, while

(th'rain man-bathing clean their bones)...
it is inward we must look to see beyond ourselves

(and in there: thousands of nuclear bombs
have already exploded & made sense) after all

deserted, th'crabgrass grabbing onto faithless sands
blowing away with th'swift dragging of the too fast

automobiles/footsteps: th'falls' feet pushed (which
do not kindly take) to: Determination (the bus)

to th'streets those over-thinkers who conclude
A Cosmos out of the mention of a bean, or

for Th'Glory of Hannibal, Alex, for the advancement
of Caesar, Anthony, Sulla, for the amusement

of Pyrrhus--Who were they? What did it gain
them?... All those common soldiers
hypnotized into believing it worth it
to deliver up their own valuable lives

for th'sport of some idiot with a big name!
... wakes up at dawn with that conquer-the-World

wearing a Groucho Mask (but tells nobody)
... how many fools & madmen & idiots &

the essential Question to ask Nixon: "Do you think
you will ever have Th'Courage to admit
you're a crook?"

a: No (I will never have such courage)

c: "I am not a crook," falls, fall stubbornest
way-short-of, ignorant of any De-

while whistling Decisiveness), who
make up their minds, size up

a lotta morons do just that
too, every day: "By golly! I'm gonna ride

that giraffe!" & then he sees it's got a long neck
and "By golly! I'm gonna have to throw up a lasso

a long ways up" & then, more or less
he gets on the giraffe & rides it all over

of a ride! let me tell U" & then may ask: "Why
did you ride that giraffe into the wall like that?"

& that's when everybody discovers he's a moron
--But then it's already too late:

the giraffe is dead already (wasted by
the moron's decisiveness), no/no/no

... ignored by all I joined "The Secret Society
of Concert Coughers: By gum" Whose aim is:

to become Immortal through coughing prominently
in some prominent Immortal Performance--Here I be
with Otis Redding & (no kidd'n! O yes), and

... So what: I actually have
a tape of me coughing with Jascha Heifetz!
(Naw: I don't believe that--THAT I gotta hear)

call out their warnings (in The Asthmatic Ward
of th'Metropolitan Opera) falls, falls
th'clenched fists & th'teeth

driver who had that accident: he drove through town (end
to end) without actually hitting anything or killing

out of these international negotiations:
a total ban on all forms of nuclear

... the Great
Peak of Existence that is Man (the end of all
things)

... some John who walked with Jesu
(tightened his butt & held his breath) awaiting

okay, that Language gave Start its legality
--God, because you have the memory of an unshelled

peanut... this I'll repeat]: It may happen
in your lifetime (& hopefully that'll be enough

to keep you in check) between Th'Lately
& Always I have seen everything... &

it's Nothing (that really scares me)
everybody fails until he succeeds--Tell you what:

Come back 50 years after my death, stand
over my grave & then say, "You have failed!"
& you won't hear a peep outta me... I, who
have lived my whole life on th'Edge

of my last penny: I who have had the sense
to make out life's self-focusing characters

--You're crazy: gimme cowards at ease (any day,

my man) keep this in mind: I don't believe
that by th'head men will wash themselves clean off

th'Cosmos in a nuclear bath (Hell, no: not
by Th'Head, but by th'tail--that, maybe) falls,

falls: the one who thinks that by Th'Tail (quite
unsuspected: End will sneak up on men, while they're

sitting there behind the blind with their shotguns
ready to blow each other's brains): We'll

explode! with numbers enough to brim over
this small planet (like a swarm of self-devouring

grubs) eating ourselves right up to Nothingness
(from tail to head, not the other way around) quite

unsuspectedly, too: Death shall conclude [sic]
(the vision of a snake shall bring us back into

Paradise again): falls, falls... pain, pain, by
a most shocking surprise--pain! pain? (and this

tooth shall pass) swallowed, between Th'Lately &
Always fall, fall... our lives, our All, collapsing,

and Always trying to find the essential question:
"When will you stop killing your people?"

a: When we no longer have the power to kill them

b: When Christ returns to this world

... what nationality has
The Better Claim to humanity? falls, falls

when you slit the throat of a bull
or plunge your daggers into the heifer
that's your affair--But torture, kill, crush
but th'hopes of your people

... and that IS my affair
--The reason you can't see that is that

you can't see any difference between cattle
and human beings!... For

what decent man, staring down th'detached look
of a homeless someone

has to ask his legal place
(of residence!) before letting th'wind of his feelings
lift th'sails of his own pity?

reels in all th'strings of a starving human being's
political affiliations to tie off his own responsiveness?

... who allows the civil status of a dying man
to overshadow his own tall consciousness?

falls: who lets the mists of some lonely old person's
ethnicity cloud his compassion?

what creature so dry he'd wait over a baby's cries
(to ask its citizenship) before allowing its tears
to moisten his heart?

... a pitiful old woman
run over by a car in front of your eyes, and:

Do you have to ask what land she hailed from, or
what race of man's

... before being overwhelmed
--yourself--by the sheer Horror that overwhelmed her

there? falls, falls between th'Lately & Always: we are
all... each other's countrymen, fall, fall pale

We
creatures of neither Here nor There.