PREVIOUS NEXT FIRST ANABASIS, Over your ridge of...
CDXLVII 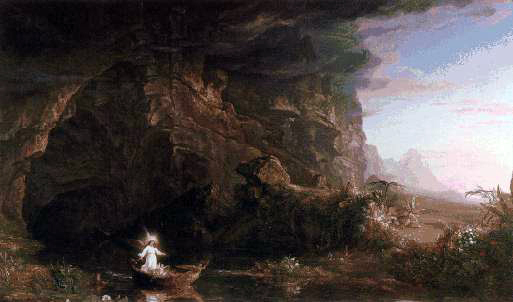 Over your ridge of
shaded securities & settled
conquests, bursting with inner-
Victory,

amongst your slaves:
be careful of th'One False Step: Th'One color
of th'greenest (dead-end Origin's
agents of despair

grown out of th'buzzing flames
all around you, from amongst th'hours
made wild free birds one after th'other one

or the monotonies that clutter your head
sporting Significance's gaudy disguises,

your head for Tomorrow, pouncing
upon th'Since (peopled grey, or phosphorous

phantoms, or those opulent demons, those all-
quenching Aprils that play within Silence's

less & less, with th'famished witches
of snow at its infancy, or th'dappled
tides that lick us down

denizens of the Adventurous, always shoveling
th'Symbols out of our all-bloodied loins
into Oblivion's giddy sails of strange velvets,

only, alone, & parts of many an all, th'edging
atoms of universes on top of each other

trying to put to bed your cares' clever contents,

your too ornate collaborations with Summer's
sultry, your honest sweat's widely intervening

divisions unjust, your motives all bantered
down their trivial lengths, your sleepy evil
that covers, of late, Decay's circumference

prophetic Never from th'Sudden's swarms, to
store it in th'null of your values like vaults

incorruptible, but only insistent blushes
which fade at th'least touch of Nothing, at

Affirmations' untold conflicts, trying to disturb
Nature's wilderness (to disturb
th'highest culture beyond Man--out of which

your words are full of letters (only), of syllables'
null decibels (only), lacking all sense: You

stricken to death or worse with those jolts (Yesterday's
Truths & Meanings--now but abandoned memories), these

through the ornate, colossal he-
mispheres of kindness & concern

towards th'conical Cannot
go those tiny objects that think

crudest sea of Imagination: raising up a stink

done an ode, building up an army in th'blunt
points of their militant prose

resilient as September, down th'deprived spasms
of civilization

... we march, baffling
Progress' good aims & mercies with our chills

deployed to deform Th'Norm, arrayed deep in
th'groves of Melancholy (after being swept off
Th'Ugly plains by Beauty

in th'Thereby, we rogues like roses--there
attempting our last stand
like shams so haughty in th'husk our fright:
th'bait--our pointless positions of late

fanged with drastic blooms, wreathes
of th'forevermore round their heads

discover by their old nests, abandoned--how long
life is! ... Then, one color of th'smallest
significance to th'universe, confined

to a chill in th'spine, in th'momentary
shock of an ape's nerves, who rocks
back & forth self-huddled in th'Warmth of

One! rocks in hand... making ready to kill
Time--with a shot at th'heart of th'blank
cosmos (about him:

belongings), the non-destructive Genius (of
a Bach), to try to splash th'Black

perhaps with a singular mud-dab, maybe
a monumental rumor he starts, maybe...

... which
justifies his military intervention, his re-
writing of all Nature's noncommittal mottoes

(to make them take on his god-gasping Egad, his ivy-
lulled) walls, a self-defense dynamo we are

All of Us: flinging blind, blinding handfuls
of th'mud around us at the snow's warden,

her looks' mauling beauty, her shiftless eye-
lashes all over our defenseless

--the moon's manikins in th'Sun
cocks th'hammer of his ghastly sight

Th'Most Important Color
of all: Th'One that makes him, marks