PREVIOUS NEXT FIRST Whose elegies...
XLVII

Whose elegies
are dried leaves
scattered on forgotten roads?

eloquent, bending their frames
infinite (which are the architectural ev-
olution of centuries snapping The Mind
with hugeness)

whose elegies, frames
which enclose the metaphysical paintings
of what aged artist, telling
his early Mind (to The late Autumn
whose elegies (become) words smarting
upon th'dullest atmosphere): Tree,

We are The Empty Spaces in that Once
Supposed Nothingness-
Sea: where An Intruder Hand
has grabbed off A Handful (&
th'Waters of it refuse to re-fill
THE GAP): We, tree,

we are: Th'Real Negatives
within those panoramas of purplest
Positives, whose elegies

provider, you, I admirer
of (perhaps) ALL that Green Poison
men call 'beautiful' about The Spring

--Ignorant of maybe some Black Splendorous
BLANK lamentably forever filled,
Tree, by your luxuriant Song ( of Summer
yields) and my incessant adoration of
O, your melodious attires! 51 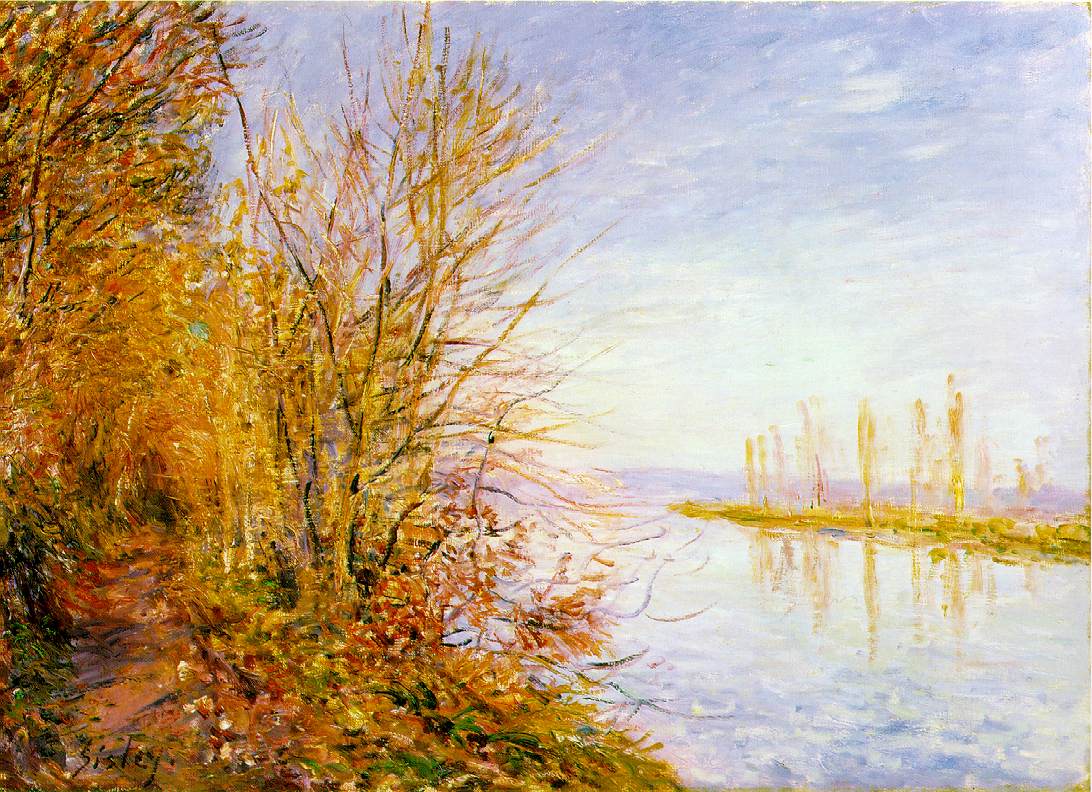 ^{51} I do not know if every poet begins as a Nature poet and goes on from there, but it has certainly been the case with me: I not only began to write poetry as a celebration of 'natural beauty,' but also as an attempt to find more poignant descriptions. It's more than probable that the vast majority of my works are pastorically descriptive (as is this poem, in its simplest sense; and nostalgic --a quality almost essential to Nature poetry since poetry tends to be composed by the city-educated). The work doesn't propose "whose" elegies, merely contemplates them --The second stanza is really a shift away from the direction of the first. Certainly "the empty spaces" are not the "elegies." The narrator & the tree are the better candidates (the first stanza clearly says that the leaves are the elegies); even so "the words" are those of a metaphor within a metaphor within a metaphor. Like a musical composition, a good poem strives to place every word, and every syllable, every 'maneuver' of the mouth just where it will best serve the cause of the verbal art --Also, like a painting, the good poem strives to attain the color most alive, the most striking image, the best perspective (of shape, by its printed form; of attitude, by its chosen vocabulary). Nothing out of place, no place out of order, the good poem seeks a sense of self within its tradition-dictated sense of balance.

The work divides itself into two distinct sections: The first one speaking about the manifestation of life as some sort of disposable after-thought (to the possibility of life): Once life becomes realized, exactly "what sort of life" becomes only of secondary moment in the scheme of things... and I mean here even so much as the intellectual realization of its possibility. The possibility may be qualified as God "whose elegies" (I like to think that, at least in human terms, because "we" are that 'inconsequential' after-thought of life in specificity, and God --obviously, the original and first realization of life (however unrealized specifically, nevertheless, absolutely realized enough life) is thusly become an irrelevant abstraction ("He" does not apply any longer, as far as "we" are concerned): As far as the dramatic truth in effect for the poem, God is dead --and "we" --all specific forms of life, animal & plant alike-- in effect, "we" are His worthwhile "elegies" (like "dried leaves scattered on forgotten roads" -- "forgotten" by God, is the usual way one would look at it, and think of ourselves as almost pitiful orphans of the thought!); "words" (achieving "smartness" upon the meaningless background-- "meaningless" meaning is only as it means anything to such a being as God). Since this is the poem's subject, it becomes only reasonable to treat the concept of Good & Evil (as the universal validity of our judgment) in the final section: beginning by unequivocally identifying those "individual/distinct" life-forms ("Tree, you & me..." [it's not 'you and I' but 'we' who are, by the way])... as the elegies (of The Universal Realization of 'Life the Possibility,' or however tenuous a Realization) as a point of departure. The final section explores the idea that our arbitrary judgment (of good & evil) need not be right (as we would rather call it, "just"), since in the final analysis it is never faithful to the universal Good but to our ever-changing momentary needs (so that at all times its only absolute requirement is to satisfy the good only of those needs within whatever greater generality of contingency --In effect, for us, the standards of good & evil must adapt to our circumstances rather than the (Ideal) other way around).

Sometimes I look back on a work like this one and despair of ever again coming up with as neat a poem, even if I tried for a billion years --Its special uniqueness transcends my ability to compare it to other works of mine (which I also consider exceptional). But I make no claim to share in anybody else's greatness: I speak only within the body of my own works... Our judgment need not be 'right' or 'just,' but it must be accurate to our specific requirements. But, please, don't take this statement to mean that I advocate one or another extreme political philosophy! This is only a detached observation, and should not be applied outside the 'laboratory of my own life' by any means: there are so many unpredictable variables out there in the "real world" that absolute statements like these cannot be applied indiscriminantly even with the best of intentions. There, in the Self's own lab, strings of conclusions\deductions come into existence (and achieve absolute truth) even if only momentarily (as they assist the tripper traversing through the field while 'he' goes along understanding, virtually, even as he is hopefully working himself towards some 'real' understanding). In that 'non-existing' field (since all those absolute truths are absolute only because they are absolutely contained within it) it is important that they all pop out of existence like bursting soap bubbles as soon as the tripper's foot has stepped off each one of them... leaving behind nothing but the momentary assist they lent to the traveller that has long since gone on his merry way --Otherwise, the tripper will bring into our real world a lot of virtually unreal understandings --those understandings will still be absolute, of course, but they will be absolute only because they have modified the tripper's mind into so warped a state that it makes it possible for them to exist absolutely within it (and, unfortunately, these warped minds are extremely infectious and hard for everybody else to be cured of them): When the tripper looks back over where he has been he should see no clues that anything had even ever existed there at all --The healthiest thing is if the tripper wonders how he could have possibly travelled from one point to the next (through it at all).@